THE FARM ON RUBBER

In the early 1930’s rubber tires on farm equipment was an absurd idea.  But Harvey S. Firestone had a vision to “Put the Farm on Rubber” knowing it would save the American farmer money and increase production.  Harvey personally oversaw the research, development, and experimentation of this project, much of which was done on his farm in Columbiana, Ohio. 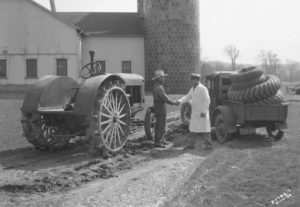 Harvey S. Firestone in this promotion photo greets the tire technician who will replace the steel wheels with new rubber tires

This 1937 Firestone Catalog picture shows the types of equipment used in the research, development, and experimentation. 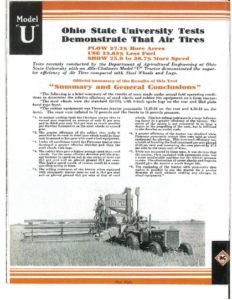 The Ohio State University was involved with the testing of rubber tires on Harvey’s farm.

The University published this “Summary and General Conclusions”

In 1932 Allis Chalmers was the first tractor manufacturer to offer rubber tires on their Model “U” Tractor.  In order to convince the skeptical American Farmer that rubber tires were far superior to steel wheels, Allis Chalmers and Firestone launched a brilliant marketing campaign.  They employed racing legend Barney Oldfield, and land-speed daredevil Ab Jenkins to run modified “U” tractors in speed demonstrations across the country. 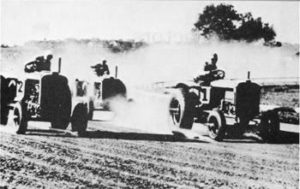 Tractor Races delighted the crowds at State and County Fairs

The tractors were fitted with a special high gear that allowed the machine to reach 60 plus mph. Barney Oldfield set a land speed record of 64 mph in 1933, only to be out done by Ab Jenkins a year later. 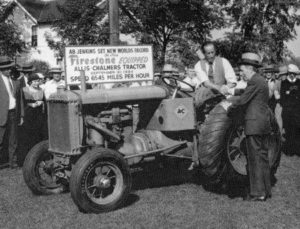 Harvey congratulating Ab Jenkins on his record setting run on Firestone tires.  This picture was taken at the Firestone Homestead in Columbiana, Ohio.

Before Harvey died in 1938, he was able to see his vision become a reality as rubber tires were by then standard equipment for the majority of American farms and the idea was going global. The priceless technological value to farming, and the world-wide advancement of food production that followed, was all because a farmer from Columbiana, Ohio pursued his dream to “Put the Farm on Rubber.”